Among the marvels offered by the Italian peninsula, among the many artworks, you will find spectacular works of nature very often encased in a piece of land or on rocks overlooking the sea. It is possible to visit the cities of art but also fabulous towns with a handful of locals that come alive in the summer. The Ligurian coast, for example, is home of the Cinque Terre towns, embellished with an antique flavour that illuminate with their colors and their life the rocks on which are built by offering breathtaking panoramas. How unique is the experience of visiting Lake Como, between the clean fresh air of the Alps and the hotels and villas which overlook the lake with their water parks and you can arrive  and depart by boat, in the peace of a fresco placide.

And talking about little jewels embedded in the rocks and shores, we have to include in the menu of this cards also a visit in a little restaurant overlooking the sea on the Amalfi coast, surrounded by lush green Parks during the day and illuminated at night by the lights of the many villages and fishing boats. To wake up and have breakfast on the terrace with the boats that return to the piers escorted by seagulls and with their nets still full of fresh catch.

Visiting Italy one cannot avoid to put Rome in the middle of your visit. The charm of the past centuries relives with art and history. In addition to the archaeological remains, the glory of the Empire, the perception and the spaces of magnificence by early Kings until the last Western Roman Emperor. The paths to be discovered are infinite and can be restricted only by available days. Colosseum, Roman Forum, Trajan’s markets and then Capitol hill and the theatre of Marcellus, Tiber river, hundreds of churches that are, just like treasure chests, filled with thousands of masterpieces. All of this without moving away from the old town.

The city center is filled with dream shopping locations, famous movie sites that bring back suggestions of neo realism and the Fellini visual poetry. All major 4 basilicas San Pietro, Santa Maria Maggiore, San Giovanni and San Paolo; the gardens, the palaces of the wealthiest families of Italian history, several ongoing exhibitions; nature trails around Rome that bring to life the relaxed way of life typical of the Romans; wine and gastronomic itinerary between meat and fruit and simple and natural life with nature to reign in the Centre of views that seem to come to life and paintings in which seem to move and stop between lakes and rivers and scents and a thousand Bamba on the hills and mountains between cobbles and stones and churches and mystery.

Today the smallest country in the world but once the Centre of power that everyone respected and feared. The Popes and the charm that followed them, the charisma, the military force and the wisdom of the ages. Today, all of these is collected in the limited confines of a state made accessible from St Peter’s square in the welcoming embrace of Bernini’s Colonnade . The basilica and the Vatican museums; the Swiss guards and their colorful uniforms, all unchanged, you feel that time within the borders of this State has stopped. The world’s richest museums filled with history enriched with the pearl of the Sistine Chapel, which can be reached after an amazing journey, surrounded by masterpieces in which you can fully dip.

The wonder of enjoying a biblical frescoes by Michelangelo in contemplative religious ecstatic silence. And for those fascinated by medieval atmosphere to visit, just to name a few, San Marino, Ravenna and its Byzantine mosaics, Bologna and its towers, Tuscany with Florence and Siena or Upstate Bergamo and Mantova and Verona, with the myth of Romeo and Juliet.

Italians, people of great passions. Sports and football in particular are the perfect example. What’s more exciting during a visit in the country to participate in the stands of a stadium, to the show performed by fans with stunning choreography and hear them sing for their heroes on the pitch? Maybe celebrate a goal in the stadium Giuseppe Meazza of San Siro, in Milan, after a day of shopping and after visiting for instance the Duomo Cathedral. From the Temple of Gothic architecture to the Temple of football.

From a temple of sport and POP concerts to Opera, classical music and fine dining, to hear. The charm of melodrama and comedies whose music was composed by authentic geniuses and booklets written by revolutionaries.

How not to think of Verdi, Puccini, Rossini and Donizetti to name but a few? It exudes romance and 19th century and almost feel the squeaking of the carriages. And how not to think you can take the opportunity of a trip to Italy to spend an evening at La Scala? This unique venue was inaugurated in 1778 and since then stands as the most prestigious and suggestive theatre, a symbol that represents the city of the Virgin Mary and Saint Ambrose. A romantic walk through Milan smartly dressed, perhaps on the occasion of the presentation of a collection of ready-to-wear or Couture, after a drink, would embed itself like a diamond among the memories if it would end crossing the entrance of the Magic Theatre, between velvets and brocades, wood and lights, suspended in a magic atmosphere, going back in centuries as if no time has passed. And then the curtain and music that unfolds like a spirit for an evening of unforgettable sensations. 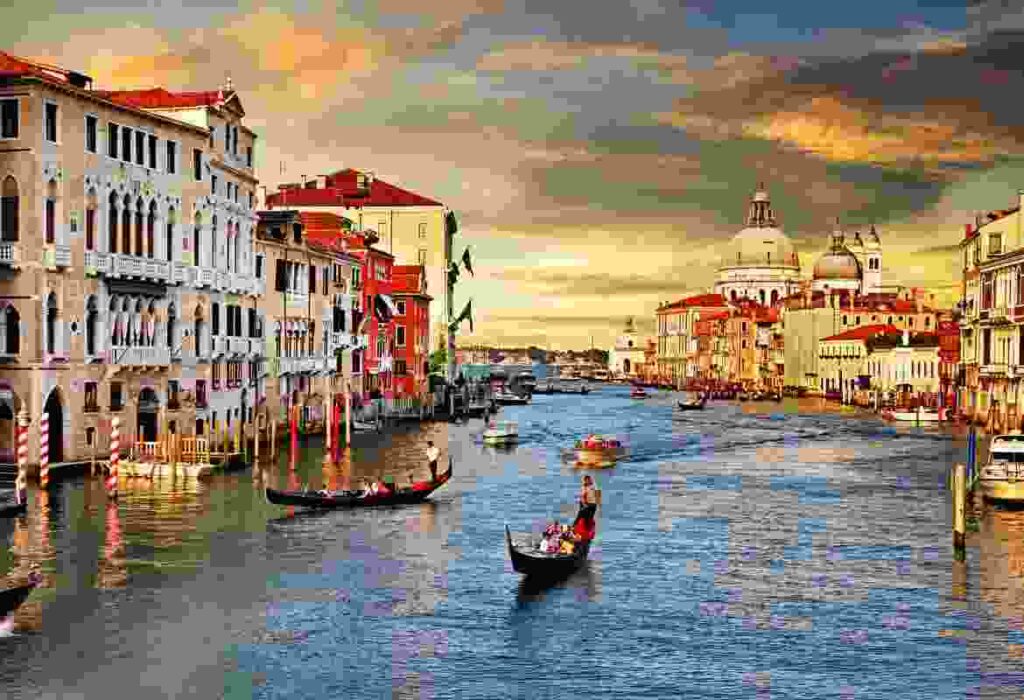 Live the dream of the city built on water. Ancient home of the Doges and their economic empire with trades of the maritime Republic of winged Lion, the banner of Saint Mark. Silks, spices and perfumes, clothing and hairstyles, masks for the holidays and world famous Carnival. The adventures of Casanova, the Shakespearean tales of Othello and the writings of Hemingway. Still, as you walk through the streets, up and down the bridges and then crossing the channels lounging on a Gondola ride into the sunset, there is an air of fable and nobility and you can hear their words echo in the air. Shopping between textiles and blown glass, then sit by the Tower of Bacari for the typical aperitif spritz and cicchetti, until you find yourself on the Rialto Bridge and piazza san Marco, with the famous bell tower and the wonderful basilica studded with gold and other treasures to be discovered. And then visit the island of Giudecca and the seafront Lido, home of the prestigious International Film Festival that is celebrated worldwide with the arrival of dozens of stars every year.

After experiencing the heat of Naples, the stunning colors of the Gulf of Sorrento and the Amalfi Coast, it would be a shame not to board the fast boat to get to Capri. The island of wild boars in the center of legends and where nature reigns in harmony with humans. The island that inspired Homer writing about the song of the sirens who bewitched Ulysses. Picturesque human life between lanes and houses and shouting and breathtaking views surrounded by rugged coastlines and caves with their amazing light effects that alter and recreate reality including the famous Blue Grotto. At the heart of island’s life the famous “Piazzetta” a popular destination for all visitors as well as writers and artists for more than two centuries. In the overlooking sea, among other small islands, the the famous Faraglioni rise from the water towards the sky. Besides the many cultural references, and the magic appeal of the sea and nature, Capri also represents for many a true shopping experience. Chic boutiques and craft shops mingle with each other, along the island’s narrow streets, to display the best of Made in Italy and typical products. Local cusine is rich and tasty and it links to traditions and abundant cultivations and farming on the island.

UFFIZI AND DAVID IN FLORENCE

Florence is, as well as Rome, home of an erudite culture of thousands of years, well visible and accessible in the historical center of the city that was of The Medici, among the paths leading from the romance and the jewels of the Ponte Vecchio (old bridge) to the magnificence of the Duomo Cathedral which stands almost of surprise among the mansions; the aromas and flavors of food markets with its devotion to the Church of the Holy Cross a main site in the history of Italian culture; from the Della Signoria Square to the halls of one of the most beautiful museums in the world: the UFFIZI, that features many wonders such as the “Primavera/Spring” by Botticelli.
And in the Gallery of the Academy you can find the perfect marble representation of authentic Michelangelo’s David, beautiful young men, to admire in closer look to discover the sublime details. And how not to mention the outspoken and straightforward language of the delightful inhabitants of the city, which was the root of poetic and musical language of Dante Alighieri, the father of the Divine Comedy.

Italian culture is not only art and knowledge, but also joy and quality of life, surrounded by the peace of nature. Think of a Grand Tour dining around the many sites of Central Italy. And how not to enjoy at least a weekend between the countryside and the hills of Tuscany – maybe a bed and breakfast or cottage offering tastings of delicious delicacies, among the vines and olive trees, returning from long walks between wheat fields and orchards and natural springs and spa, enjoying the sound of crickets in the evening with friends and lovers and the morning saddle up for a horseback ride at dawn.